For the host-to-switch connections, we’ll need straight-through cables, so named because the wires in the cable run straight from a particular pin at the host end to the same numbered pin at the switch end. 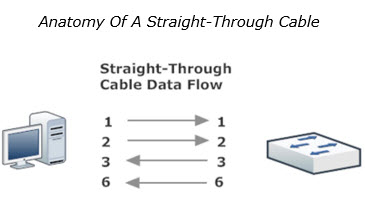 The switch-to-switch connection presents a special challenge, as each switch transmits on pins 3 & 6 and receives on the 1 & 2 pins.   A straight-through cable won’t do here.

That challenge is met by the crossover cable, so named because the wires cross over from a particular pin on one end of the connection to a different pin at the other end.  Either switch can send a frame on one of the “transmit” pins, and thanks to the crossover, that frame arrives on the remote switch on a “receive” pin.

When Gig Ethernet (1000-BaseT) is in use, all eight wires are used, and every wire can send and receive at the same time. 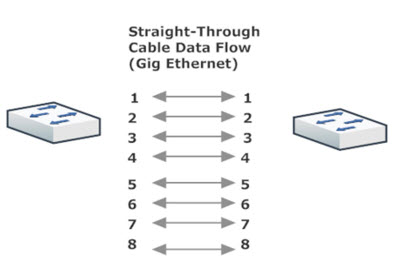 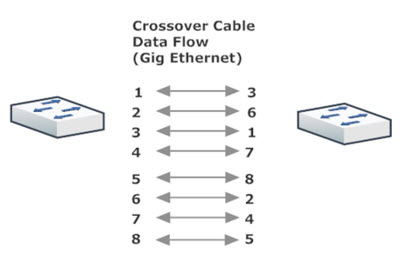 You may never need crossover cables, though, thanks to…

What follows is something you should know for real-world networking, and it may well show up on your exam. However, unless Auto MDI-X is specifically mentioned in an exam question, go with the theory presented in this chapter regarding straight-through and crossover cables:

With that in mind, let’s chat about Auto MDI-X.

Whether it’s for a home lab or a client site, needing a certain cable type and not having one is a terrible feeling – a feeling that can be cured by Auto MDI-X (Automatic Medium-Dependent Interface Crossover)  This life-saving feature allows a device to dynamically adapt to a straight-through cable where a crossover cable would normally be required, and vice versa.

To enable Auto MDI-X on a Cisco switch port, set speed, duplex, and mdix to auto on that port.

Now it’s time for us to revisit the Ethernet header and trailer we examined in the previous tutorial.   And when you’re done there, visit my  CCNA Video Boot Camp on Udemy!