It’s fine if a router has a successor for a given route without having a feasible successor – as long as the successor route is available.

EIGRP uses DUAL to calculate route metrics and to query neighboring routers in the situation described here.  DUAL will first mark the route in question as active.  Sounds like a good thing.  Thing is, the “active” refers to the fact that EIGRP is actively calculating the route, not that the route is active and can carry data.  An EIGRP active route cannot be used for routing.

With the route marked active, DUAL will now send queries out to the router’s EIGRP neighbors.  This query is basically just one neighbor asking another “Hey, do you know how to get to this network?  I just lost my route to it.”

If the first queried router doesn’t have such a route, that router then asks its neighbors.

This process continues until a queried router replies with the desired route or the routers being queried run out of other routers to ask.

Routes come out of active state so quickly that it’s hard to spot one, and that’s the way we like it.   Routes that are no longer being calculated by DUAL and are therefore ready for use are passive, and this is one time where passive is better than active.   Here’s a look at a typical EIGRP topology table.  Every single route in the table is passive, and that’s the way we like it. 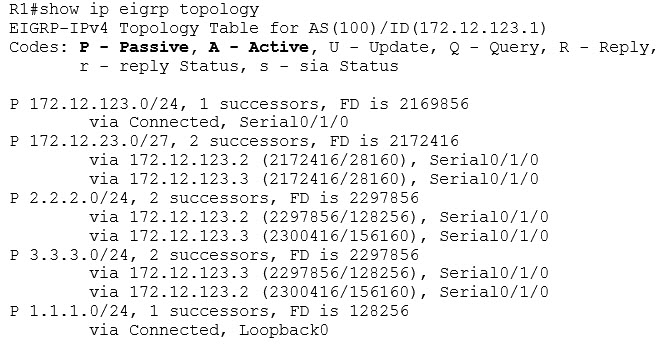 This wraps up our look at the fundamentals of EIGRP you’ll need to know to earn your CCNA and CCNP certifications.    Thanks for making my work a part of your success…

…and in case you missed any of the previous sections — here they are!